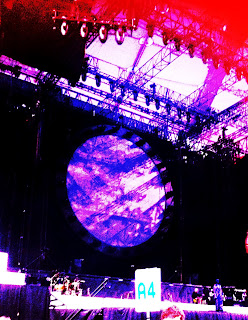 I'd seen Roger Waters perform decades earlier, at an outdoor venue, Expo Theatre, Vancouver in September of 1987. As the sun set, he played a few tunes from "The Wall" and other Floyd albums, as well as his solo stuff from the Radio K.A.O.S. tour.

Those were the good old days and I was excited to be seeing the master of concept rock again with his legendary stage show over twenty years later. I ended up liking it so much the first time the Wall tour came round, I thought I'd go if the opportunity presented itself once they announced the returning show dates.

The first time round, I was offered a last-minute ticket and went with a friend from the local music scene. He had a group of Floyd Heads with him. These guys had center-middle seats with a full, yet far, view of the massive stage. What they also had was a full buzz going. The cat at the end of the row, by the stairway, was rather drunk and getting into altercations with security and other concert goers behind him. This helped to keep the heat off us. We took advantage of the cover provided by our belligerent, red-faced cohort and stood up to dance.

Seeing that production for the first time was truly awe inspiring. I've known every word to "The Wall" since I was old enough to sort through, and appreciate, my mom's record collection ( back around 1983 ) . Seeing those animated, retro-visuals, combined with the new lightshow magic, kept my cornea darting to and fro, while my feet and arms moved to the periodic moments of danceability. The show seemed to go on forever as we barked along with the songs and acted out lyrics at a safe distance from "The Wall" which would eventually come falling down.

That particular concert was one of my favourites. It was the 45th time he had performed the returning classic. It had the right combination of spectacle and substance. Roger and his band nailed it and seemed to be really enjoying themselves. With all its depressing imagery and lyrics about the atrocities of war, it was surprisingly fun and uplifting. I would go on to rave to my friends about the show and eventually return to it when it came back to Vancouver over a year later. 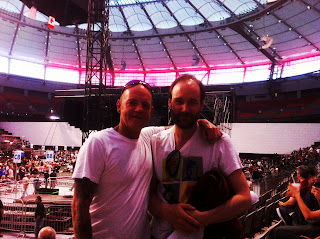 My second "Trip to The Wall" would be quite different, though. I ended up, this time, being generously given two seats up front ( fifth row ). I went with high school buddy and band-mate Gary the Bull-Ox who I knew would appreciate Roger's depressing brand of concept rock and sat in anticipation, watching a strange looking mannequin at the front of the stage.

Next to me was a lady and her husband in their golden years. I started raving about how great the show was going to be and how she'd love it. All of a sudden the show began with Roger showering this humble effigy of a soldier with fake machine gun fire during the sinister sounding "In the Flesh". The lyrics got dark fast : " ...what's behInd these cold eyes...you'll just have to claw your way through thIs disguise." Then there came the perverted animation sequence during "Empty Spaces". Somehow, I'd forgotten about the endless parade of psychically disturbing images that "The Wall" has to offer. And how utterly depressing and shocking it really is.

Back, first time round, I was distracted by the rowdy revelry of the group I was with and stunned by the visual aspect of the stageshow and the construction and destruction of The Wall. There was less scrutiny at the back of GM Place and more room to move and dance. I dIdn't feel lIke I was in a p.o.w. camp with security marching back and forth. It was the opposite at  BC Place in the fifth row on the floor below the sides of "The Wall".

I suspected my neighbors weren't real Floyd Heads and more there out of curiosity and hoped they wouldn't mind my pontifications and interactions with the show. I always prefer to dance at shows, or at least have the option to. I recalled dancing quite a bit the first time I saw it, so I figured I'd be rocking out again.

Being up front actually made it hard to dance and participate because your involvement and approval implied agreement with Roger's twisted vision. Security was rabid as ever; pacing up and down, rousting anybody sticking out too far into the aisle, and escorting interlopers away.  I wasn't gettIng shut down for dancIng; I was shuttIng myself down from dancing. I had gotten too close to "The Wall". I'd seen it twice now, the magic was old and I knew the lyrics too well.

As the plot of "The Wall" unfolded, I found myself conflicted as a fan. I wanted to cheer on the band and raised my fist to pump it in the air just as images of nuclear explosions appeared. I quickly pulled my hand down, embarrassed to be apparently cheering mass destruction. It only got worse as Roger began his routine of turning the show into a twisted demonstration of how quickly fascism can take over crowds.  All this as security guards hassled concert goers that strayed in the aisles: sticking flashlights in their faces and trying to yell above the music. The band was all dressed in black military outfits and singing of fascism, racism and crowd control. It was brilliantly done- the next thing you know you were in a concert steeped in paranoia and your every move became strangely symbolic.

You could compare it to watching The Stephen Colbert Report. Colbert does such a good job of acting right wing, that some may not notice how left wing the jokes actually are. In The Wall, Waters' redeeming message comes in a short brilliant burst at the very end, once the Wall crumbles and the band does a singalong. Until that time, it is bleak.

"The Wall" compares the fervor and decadence of rock to the unchecked rise of dictators. It all makes sense, if you understand the themes and plot of "The Wall", but I worried for the unsuspecting elders beside me. What did they think of me as I danced to  the song 'Young Lust' ("ooooooh I need a dirty woman....ooooooh I need a dirty gal ") ? Did they wonder why I seemed to be singing along to "Waiting for the Worms", chanting "smash in their windows and kick in their doors"?

It felt wrong dancing to thIs band, all clad in black-leather, military-like outfits. Slowly but surely, I found myself sitting down instead of rocking. I was still enjoying watching Roger and the band and things in the lightshow I had missed the first time, but I was way more reserved. I kept seeing it through the eyes of the people next to me and felt like a bit of a freak for knowIng all the lyrIcs so well. I conclude that "The Wall" was not a gig to go to with your mother or your girlfriend; it was far too cynical. It's the all-time most depressing Rock Opera, without a doubt.

Heading to the bathroom during intermission was insane. I've been to many shows and the lineup for the men's was the longest ever. Seeing all those men quietly shuffling in an orderly line seemed like a scene out of "Another brick in the wall". It was like we were off to the grinder. It was the biggest sausage-fest to hit BC Place since the last monster truck show.

I've had decades to make sense of the meaning behind "The Wall". At it's core, it is anti-war with lyrics like "mother, do you think they'll drop the bomb?". One particularly  effective moment was when the animation showed bomber planes dropping red logo-bombs. There was the Mercedes logo, Shell and Exxon, the hammer and sickle, American and Saudi logos. I was surprised at the pinpointing of powerful corporations and their involvement in war profiteering. I thought it was bold and fearless.

What I couldn't understand, was how Roger could go through with this dark work every night for so long- to the point of returning to Vancouver with it. I was psychically weathered by all the negativity that pervades "The Wall", which I really started to dwell on, second time round. He's obviously making good money and has the show perfected but I hope he lays it to rest and cranks out something new. I have to hand it to him for exposing some really messed up problems with the human race that still continue. He tied in similarities between WWII and the modern-day war on terror through some pretty radical visuals. Hopefully, the show's message got through to some hardened hearts.

The second show seemed anticlimactic. Roger was upset at the end, seemingly a bit unhappy with the amount of applause and saying that the crowd was great except for this one guy up front. It was probably someone yelling: "Pink Floyd!". Who knows? I'm sure a few people thought he was talking about them. Paranoia again!

The very next day I was miracled a couple of tix to Tenacious D at the PNE outdoor Forum. I couldn't find anyone for the extra so I dropped it on a kid at the front gate who was stoked. Once inside I went down to the floor area and blended in to watch Jack Black and Kyle Gass do their hilarious rockin' brand of joke-rock. 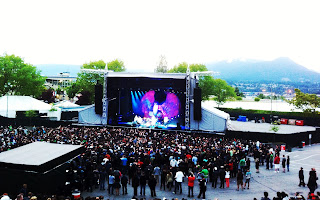 The D did their famous bits: "Kyle quits the band" and "Tribute", their guitar-off with Satan. Black looked like he was in his element, enjoying the rock n' roll lifestyle and the great weather. The band played fiercely before the raucous crowd with a giant inflatable winged,demon-headed penis towering over them. I had to laugh at the end when it sagged and shriveled as the band took their bows. The band was tight and heavy, performing characters from the Tenacious pantheon. Guitarist John Konesky was funny as Satan, when he accidentally fell backwards over his amplifier. Jack Black did some ad-lib comedy when he cracked" you $#$%ers don't realize how rare It is for you to see the Lord of Evil trip over his amplifier!! It happens, like, once in eternity!

It was amazing how different the two shows were. One was an epic masterpiece that left you spiritually crushed/revived and, the other, a rock show that made you laugh and holler. If I had to choose to see one again I'd have to go with Tenacious D because it was such a gas. Hopefully the jokes wouldn't get stale the second time round. Bottom line is: very few bands can be seen night after night. Most bands don't change their set lists night to night because they're expecting to play to a completely new crowd.

The Grateful Dead were the ultimate band to tour with because they changed their shows up each time. No show was ever remotely the same. The song list would change, segues would randomly happen and the solos and tempos of the songs would change as well. It was partly for that reason that many Deadheads collected tapes of shows and followed them around on extended tours - some even living on the road, selling wares to the crowd in the lot. Dylan, Hendrix, Zeppelin and Phish, also changed up their set-lists nightly. Keep it fresh!

Who did I leave out? Think of bands that changed their set-lists every show and leave suggestions In the comments. Cheers, Str34mDwellr